'The SEE Turtle:' Palm Coast Arts Foundation unveils No. 18 on The Turtle Trail

The Palm Coast Arts Foundation unveiled its 18th turtle sculpture for the Public Art Turtle Trail on Oct. 15. This turtle, installed in front of sponsor Tomoka Eye Associates at 21 Hospital Drive in Palm Coast has a natural name: "The SEE Turtle."

John Bramblitt learned to paint after he lost his eyesight by using art techniques that have been around for centuries combined with white cane techniques that visually impaired people use for orientation and mobility.

"I figured if I can get across a city using a stick basically, then surely you can navigate around a canvas," he said. "It's much smaller, and you're never going to break your foot, you're never going to get hit by a car. So that's where I started. It's lines that I can touch and feel, and then I change the way that the colors feel."

He mixes his paint colors with mediums, so he can make white feel like toothpaste or black feel runny like oil or make a color hard, so he can carve it with a knife.

"It just changes the texture and viscosity of every color, so that through touch you can understand the color and then you can draw the lines," he said. "If you're a sighted person, you're going to look at the lines and see where they are. If you're visually impaired, you're going to use your sense of touch to know where you are and where you've been, like when you're eating, when you're cooking and when you're painting."

Bramblitt said the same region of the brain that interprets sight is also the region that conjures dreams and imagination.

"So even if you lose your eyesight, as long as you have that part of your brain, you can still imagine, and you can still visualize," he said.

Bramblitt, who is from Denton, Texas, lost his eyesight 21 years ago, and he's been painting ever since. He has painted murals in New York and Dallas. And, as his SEE Turtle shows, he is known for his bright colors.

"He is one of — if not the — most acclaimed blind artists in the country," Crouch said. "He gladly accepted, and that's what shocked me; we pay the artists only $500. We shipped the turtle to him, and he got it back to us really fast."

Watson said the unveiling was supposed to take place three years ago, but because of delays due to COVID, the unveiling is coinciding with the Tomoka Eye Associates' 50 anniversary.

"To our advantage, the pandemic delayed our unveiling and pushed it into our 50th anniversary year," Watson said. "There is no better way to celebrate than with a community event and to recommit our mission for another 50 years. We believe that sight is the most cherished of the senses. We participate in two local free clinics. We have our own Tomoka Eye Foundation contributing yearly to local sight related charities."

Watson has been the Conklin Davis Center's chairman of the board for the past seven years.

Bramblitt lost his eyesight after suffering a series of severe seizures when he was a college student. At the time he thought his world was over. While he always liked to draw, he never painted until he learned how after he became blind.

The SEE Turtle was the Palm Coast Art Foundation's second turtle unveiling since the pandemic, and three more will be coming soon, Crouch said.

The turtles normally have a theme, such as honoring a famous artist. Crouch said the foundation made an exception for Bramblitt's turtle.

"Bill said, 'Do what you feel,' and (Bramblitt) did an ocean theme," Crouch said.

The information on a plaque next to Turtle 18 will be duplicated on a Braille plaque, she said. 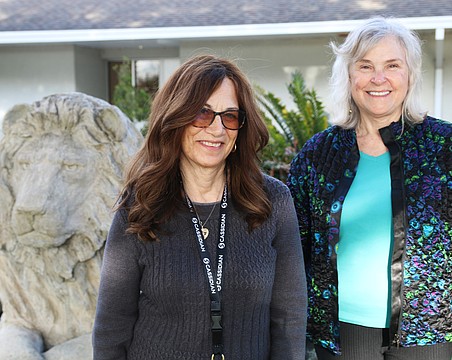 Back to business: Conklin Davis Center continues to serve the blind after merger 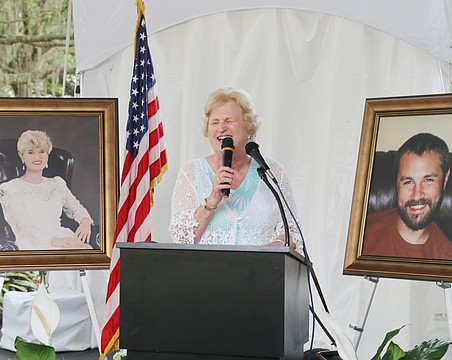 A rebirth of services for the blind: Conklin Davis Center celebrates ribbon-cutting 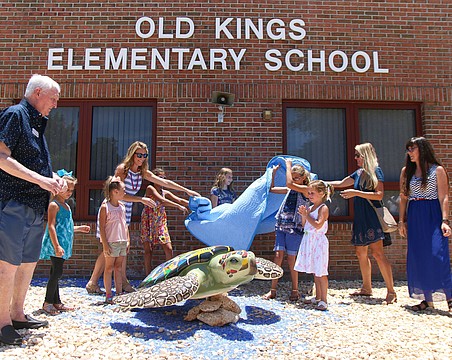 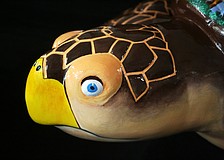 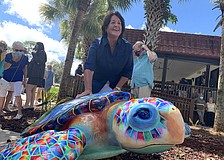 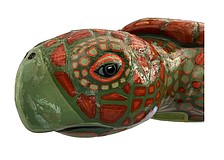 Inspired by Normal Rockwell, 'Norman' joins the Turtle Trail as Turtle No. 15 at 2 p.m. Sunday 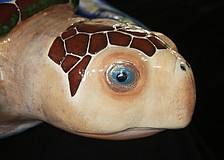 Turtle 12, inspired by Florida Highwaymen, to be added to Flagler County government building 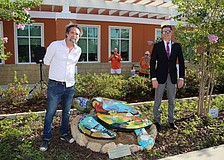