3,200: Approximate number of arrests per year

21: People arrested due to use of license plate reader technology

$5.25: Daily operating cost charged to people who've been fitted with an ankle monitor

38,790: Total volunteer hours donated to the FCSO by Citizens on Patrol volunteers in 2018

4: Number of accreditations held by the FCSO (for corrections, communications, law enforcement, and the National Institute of Ethics)

Addressing a crowd of about 50 people, including numerous local officials, at the Hilton Garden Inn in Palm Coast the afternoon of April 18 for his annual Addressing Crime Together meeting, Sheriff Rick Staly highlighted such accomplishments over the past year, pointing to figures and charts tracking crime, arrest and prosecution trends.

"If they’re in the Green Roof Inn, they are not preying on you; it’s pretty simple," Staly said. "So with a motivated team and focusing on the people that are doing the crime, that’s why the arrests are up," even as crime decreases.

Planned initiatives at the Flagler County Sheriff's Office in 2019 include:

But Staly also pointed out areas of concern: There's enough cyber crime that the agency is planning a new unit dedicated to tackling it.

A group of drug dealers is trying to control the market centered around Palatka, Bunnell, Palm Coast and Daytona, selling drugs that are coming out of Orlando.

Locals who'd been imprisoned over crimes involving the Bloods gang have been getting out of prison and returning to the community.

Deputies, dealing with overdoses, are seeing stronger opioid cocktails on the street, and increasingly have to use more than one dose of Narcan to revive an overdose victim.

Staly said his agency is creating several new units — an Intelligence Unit, a Cold Case Unit and a Cyber Crimes Unit - to deal with those issues.

Residents who attended the meeting said they were generally satisfied with Staly's approach.

Edmond Rover, a W-Section resident who recently moved to Palm Coast from Sebring, said he'd attended in part because of general concern about youth crime and gangs. And, he said, "I wanted to know what kind of units they have. ... I hope that have enough units to do all this stuff."

Marilyn Deynes, a Palm Coast resident, said she had concerns about how crime and policing will be affected as the county's population grows.

But, she said, "Sheriff Staly is basically on it when it comes to crime."

See the box below for some of Staly's comments on major issues facing the community.

On the opioid epidemic:

"As this trend for opioid addiction increased, I issued Narcan to every deputy sheriff. … I've seen some of the Facebook posts that we do, when we've saved someone, they (commenters) say, 'Let them die,' because they're an addict. Well, I don't believe in that. I think our job in law enforcement is to save lives. ... We don’t put those posts out anymore when we save someone, just because it becomes too much negativity."

On the recent homicide on Belle Terre Parkway:

"As far as the recent homicide that occurred — that kid (suspect Marion Leo Gavins Jr.), if you look at his criminal history since 2012, this could have been predicted. And the juvenile system basically patted him on the wrist and said, 'Don’t do it again.' And that's the problem with our juvenile justice system. ... You have to find a balance for the kids that ... made a simple mistake to turn their life around, but then you also have to handle strictly kids that are clearly going down the wrong path."

"Up to 80% of our car breaks could be prevented if the victims would simply lock their cars. ... And keep your garage doors down when you’re not around."

On adding a program to help inmates earn their GED:

"In the detention facility, when we first started this ... mathematics and English and reading was at the second- and third-grade level. ... For the inmates that want to turn their lives around … we will help them and try to give them the tools to be productive citizens."

"A number of years ago the backbone of what was considered the Bloods here went away to state prison. Unfortunately, they're all getting out now, and guess where they're coming. And thats another reason why I'm starting the Intelligence Unit."

On the County Commission's decision to approve a new branch location for the FCSO, near the county library on Palm Coast Parkway:

"I think the (county) commission made a hard, but right decision. Add I can tell you that my employees are very happy that they no longer have to worry about going back into 'Mold Ops.' What the outcome of that building (the former Operations Center) will be, I don't know the answer to that. That's an answer that the County Commission will have to address." 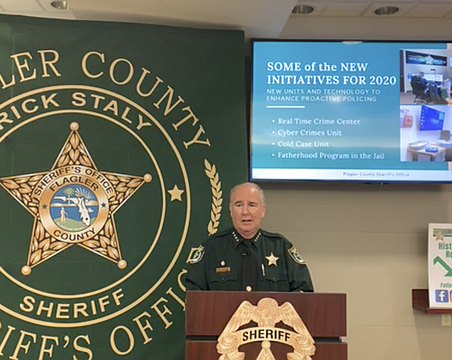 Crime in Flagler down 47% since 2017, Staly says in community meeting 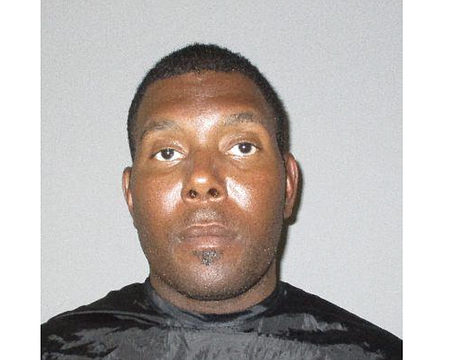 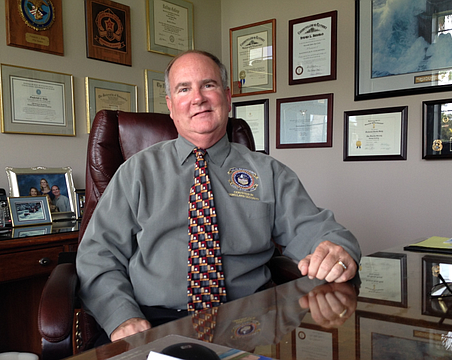 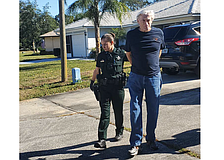 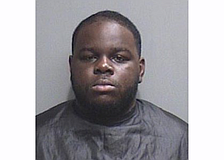 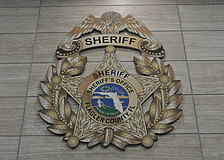 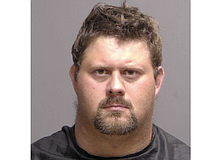 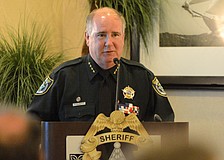